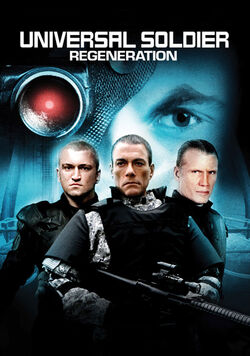 The film was released theatrically in Israel, Phlippines, Singapore, Indonesia, Malaysia, Kuwait, United Arab Emirates, India, Lebanon, Jordan, Italy, Japan, and Pakistan. It went Direct-To-Video (DVD & Blu-ray) in the rest of the world. The film has received average to mixed reviews, but it has since developed a notable cult following.

When terrorists threaten nuclear catastrophe, the world's only hope is to reactivate decommissioned Universal Soldier Luc Deveraux. Rearmed and reprogrammed, Deveraux must take on his nemesis from the original Universal Soldier and a next-generation "UniSol".

Retrieved from "https://universalsoldier.fandom.com/wiki/Universal_Soldier:_Regeneration?oldid=3910"
Community content is available under CC-BY-SA unless otherwise noted.