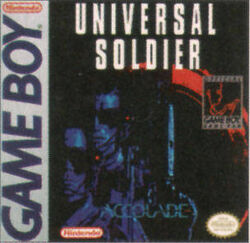 Universal Soldier was a video game for the "Mega Drive" and "Game Boy" that was a rebranded version of the game "Turrican II: The Final Fight".

Console conversions of Turrican II for the Mega Drive and Game Boy were produced by The Code Monkeys for Accolade, who had kept the rights for the console ports of the franchise. But at a late stage, Accolade also acquired rights to produce a game spin-off of the Jean-Claude Van Damme movie Universal Soldier and decided to rebrand the game as Universal Soldier. Turrican's sprite was changed into a marine and several other substitutions were made. Amongst other changes, the eyeballs-walking-on-fingers became mini tanks, and instead of a large mech/steel dragon in the first stage, the player now faces a large representation of Dolph Lundgren's character in the film.

The three shoot 'em up stages, cut out from the port, were replaced by the developers with three original stages (a Vietnam jungle, a fortress, and a motel/car junkyard) that in theory should link the game to the film's atmosphere. The rest of the original Turrican II stages are still present and remain mostly intact in overall design, though some of them appear in different order, along with the three new levels differently scattered through them.

A version of Universal Soldier was also produced for the SNES, but it was never published and only exists in the form of leaked ROM.